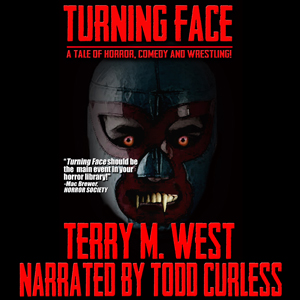 Turning Face: A Tale of Horror, Comedy & Wrestling! Narrated by Todd Curless! Tojo Smith has a serious problem. He is the number one heel for a small wrestling promotion in Texas. He is also an earthbound demon and his mission is to inspire hatred in people. This is his service to the greater evil. But suddenly, the wrestling fans start to cheer for Tojo. He goes from the most hated villain of his promotion to the most cheered antihero. And no matter how loathsome his actions in the ring become, his popularity soars. When Hell notices this imbalance, Tojo is given an ultimatum: get the hate flowing again or be sent down into the fiery pits!

This entry was posted in Audio Books. Bookmark the permalink.