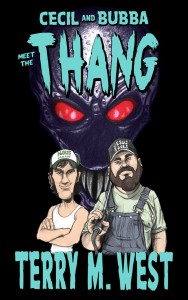 Buy the Kindle or Paperback!

“Cecil & Bubba are no doubt on their way to Southern-Fried Cult Legend status!”-Heather Omen, The Horror Nation

Cecil McGee and Turner “Bubba” Teague return in their first full length adventure! The cursed slacker rednecks were introduced in the pages of the horror collection, What Price Gory, in the story Cecil & Bubba meet a Succubus. In that tale, Cecil & Bubba accidentally killed the dog of Rosalita, a drunken gypsy. She cursed them:

Soon after that run-in, Cecil & Bubba hired onto a paranormal investigation of a local haunted house to earn some extra cash. During that investigation, the two discovered that Rosalita had not been just whistling Dixie! They ended up tangling with a nasty succubus and the boys barely escaped with their lives and souls.

In this follow-up novella, Cecil & Bubba spend what they think will be an uneventful Halloween night at McGee’s Gas, Garage and 24 Hour Convenience center, until they are joined by a new and unlikely ally. Soon after that, a pair of FBI agents brings a van in for emergency service work. The agents are hauling a weird cargo and Rosalita’s curse soon causes an ancient evil to rise and walk the earth once more. Cecil & Bubba find themselves not only fighting for their lives, but for the very planet as well. Can our two heroes prevail over the horror of THE THANG? Prepare yourself for a close encounter of the horrifying and hilarious kind!

Here is what some fine, upstanding reviewers have said about this tale:

“CECIL AND BUBBA MEET THE THANG does it up big, folks. [West is] easily one of the best in the field….”-NecroStein, Texas Terror Entertainment

“If you know someone that is hesitant to get into the horror genre, introduce them to Cecil and Bubba…”-Dale Herring, GEEKDOM OF GORE

“Absolute brilliant pairing of humor and horror. Not everyone can do it but West nailed it… again.”-Michael Donner, Creepercast

email
This entry was posted in Books and tagged books, Cecil & Bubba meet the Thang. Bookmark the permalink.