The Perfect Guy for the Job 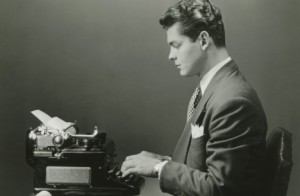 MOVIE PRODUCER GUY: I have always respected your writing. I would love to have you write a horror web series I am developing.

ME: Sounds great. Is there anything of mine that you feel would be good for this?

MPG: Hit me with something.

ME: Well, I just came out with a collection called What Price Gory. The title story is about two horror writers who have a supernatural contest to determine the new king of horror.

ME: Each episode could be a story that one is telling the other. The final episode would determine the winner?

MPG: (face scrunches up) Hmm, what else you got?

ME: I did another collection called A Psycho’s Medley.

ME: That one could involve prisoners in an institution for the criminally insane recalling the murders that landed them there?

MPG: (scrunches up face again) Nah, I think I would like to go in a different direction. Do something a little more original than that.

MPG: (presents imaginary picture with outstretched hands) Maybe a haunted tenement in the hood. Six rooms in the building. Six tales of terror. Each episode would spotlight a new horror. And the first episode could involve a giant humanoid bug creature. Like that movie, Mimic. And the building should be investigated by a couple of FBI agents. Like X-Files guys. A dude and a chick. And there should be a little girl involved. Like the Newt character in Aliens. Each episode could take place in a different room with different monsters. Like, the second room and episode could be a succubus room. And the succubus character could be just like that character on the Lost Girl show.

ME: (digests it all) Oooookay. So you want an original episode with the monster from Mimic, two agents just like Scully & Mulder from the X-Files and a little girl hiding in the house like the Newt character in Aliens?

MPG: Yeah! Put that shit in a blender and I bet it’ll taste great!

ME: I’ll get a first draft together.

MPG: Yeah, we actually made some changes.

MPG: I had a meeting with my crew. My sound guy hated it.

ME: Your sound guy?

ME: Well, we don’t want to insult his delicate sensibilities.

MPG: We got together and came up with a better idea. Instead of a bug like Mimic, we want zombies. But we want to do zombies a little differently. Like the ones in the REC series. Red-eyed and hyper.

ME: (sighing) You realize I have to completely rewrite the episode?

MPG: Well, it was a first draft. You have to expect some tweaks.

ME: And your catering service is fine with this direction we’re taking? As well as the production assistants? It seems you want everyone’s approval but mine.

ME: Yes, with your crew, apparently. I just wish you had taken your idea to committee before you came to me.

MPG: I will pay you a little extra, okay?

ME: How much extra?

ME: Could we iron that out now?

MPG: No, not now. So anyway, getting back to the script; two things that irked me: you had, like five extra characters in the building and you killed the Newt character.

MPG: The Newt character does not die, okay? She lives.

ME: Newt was killed off in the 3rd Alien installment…

MPG: Don’t talk to me about Alien 3, okay? I hate that movie. I am following the Dark Horse comic timeline.

MPG: I want a strong mother and daughter bond between the female agent and little girl.

MPG: Yeah! Exactly! And all of these extra characters have to go.

ME: Doesn’t it stand to reason that people would be living in the building?

MPG: Maybe a few. But I don’t have the budget for a big cast.

ME: But you want a zombie horde.

MPG: Yeah, well, write in six zombies. We will shoot them tight and fill up the screen. But absolutely no extra characters after that.

ME: Wait, then who dies? This is a horror series. Someone has to die.

MPG: But not the Newt character!

ME: Okay, that’s fine. But you need characters that die.

MPG: One new character per episode. That’s all we can afford.

ME: And maybe we could put a red shirt on the character that is going to die in each episode.

ME: Why don’t we do this? Why don’t we bring in an unsavory character, like a gang banger or a drug dealer, kill off the male agent halfway through the series, and have the bad guy team up with the female FBI agent and little girl. Create a little tension and throw people off.

MPG: (shakes head violently) No, no, no… that’s not the story I want to tell!

ME: But not knowing who lives or dies is perfect. Look how well it serves The Walking Dead.

MPG: Hey, we’re doing something original here. I don’t want to rip off other stuff.

ME: But… the REC zombies… the Mimic monster… the X-Files and Newt?

MPG: Exactly! All original! I want this story told exactly as I want!

ME: Wait, I thought you wanted me to tell the story?

MPG: Yes. My story. And by the way, there is way too much dialogue, okay? This needs to flow like a video game. I want half the dialogue gone.

ME: You want a video game story?

ME: Maybe you want Uwe Boll for this?

MPG: He’s too expensive. And your script came out to 26 pages.

ME: You know, the minute per page ratio thing isn’t always an exact science. And…

ME: I can make the font larger?

ME: So you want me to write your 14 point font, 30 page script exactly how you see it? And you want an all new original story comprised of ideas you’re just borrowing from existing horror movies and TV shows? You also want a practically dialogue-free presentation in video game format? And you don’t care if anything that makes my fiction notable is in there?

MPG: Yes! Finally, you’re getting it!

ME: So, maybe I should just sit here with a notepad and pen and you can just dictate it to me?

Movie Producer Guy hands over a notepad and pen.

MPG: Establishing shot. Fade in on a dark and stormy night…