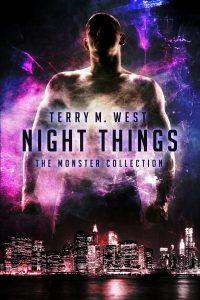 Buy it on Kindle or audio-book

“As someone who grew up on Universal’s monsters, I was blown away by Terry West’s modern interpretation of not only Dracula and Frankenstein, but the Mummy, zombies, werewolves and more! Every page crackles with sarcastic wit, horror and action.” -Hunter Shea, The Jersey Devil

“Think ‘True Blood’ in an urban setting, add a dash of ‘The Sopranos’ and blend in a big-budget action blockbuster finale, and you have something approximating Night Things.”-Tracie McBride, Ghosts Can Bleed

Dracula versus Frankenstein
Undead and Kicking:
Monsters and the Magic Now

Praise for Dracula versus Frankenstein:
“A contemporary spin on a pair of classic characters with a dose of Lovecraft–riveting action and enough plot twists to make Stoker and Shelly rise from the grave.”-Timothy Hemlin, author of The Wastelanders
“Night Things is populated with familiar monsters given new life, meaning and motivation by the skilled pen of Mr. West.” -Parlor of Horror
“Dark, violent, quirky and inventive, Terry M. West’s Night Things: Dracula versus Frankenstein features all the horror icons you love, casting them in a new light and adding dimension to their personalities and histories. Highly recommended.”-Horror Novel Reviews
“A solid horror novel that doesn’t shy away from the darkness. West’s monsters are of the vintage variety, true to their literary origins, while the story itself forces you to think about the nature of good versus evil, and monsters versus man.”-Beauty in Ruins
“Night Things is another amazing work of horror fiction from one of the best minds in the game. This is a horror story for horror fans.”-Horror Society
“There’s really no other way to state it: Night Things is a sensational book.”-author DS Ullery
“Most highly recommended to all fans of modern horror!”-Fans of Modern Horror
“You’ll fall in love with Night Things.”-Texas Terror Entertainment

Praise for Undead and Kicking:
“The story is brilliant and the universe [West] has created is absolutely amazing.”-Horror Society
“In terms of sheer spectacle, the climax here may be the strongest in the series. If you’re new to the series, do yourself and favor and start from the beginning, but if you’re already a fan, you’ll be thoroughly satisfied with West’s latest.”-Beauty in Ruins

Praise for Monsters and the Magic Now:
“[Monsters and the Magic Now] is a grip­pingly twisted saga. West depicts this macabre world with style and dark humor.”-Bram Stoker Award® winner Lucy Taylor
“Will definitely leave an indelible mark deep within your soul!”-DIABOLIQUE MAGAZINE
“Only Terry M. West could spin a tale so dark and brutal and still make it transcend horror and become a work of literary craftsmanship.”-Kevin Lintner, SANITY’S GRAVEYARD
“Equally disturbing and powerful…”-Bob Milne, BEAUTY IN RUINS

This entry was posted in Audio Books, Books and tagged audio books, books. Bookmark the permalink.