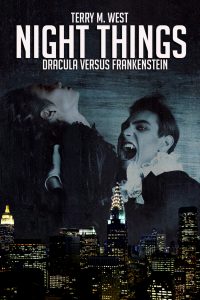 This novel spans several centuries, following the relationship of the two most iconic monsters in literary history. Once as close as brothers but now sworn enemies, Bram Stoker’s Dracula and Mary Shelley’s Frankenstein meet for a final showdown beneath the streets of New York City.

Night Things (Dracula versus Frankenstein) takes place in a world just like yours with one startling difference: every creature of legend has stepped forward from the shadow and they now exist shoulder to shoulder with humankind! New York City has become a macabre melting pot. Vampires, werewolves, zombies and ghouls are now the new immigrants and they are chasing the American dream. The Night Things have become part of the system. But many humans feel the creatures are dangerous ticking time bombs.
Dracula, considered the messiah of the Night Things, builds an unstoppable army as he plots to wipe humanity from the face of the earth. The mysterious New York crime boss, Johnny Stücke (the creation of Frankenstein) wants to keep the peace between the Night Things and humanity. Stücke fears total extermination of his kind, should Dracula unleash his forces on New York.

The fight for the night begins.

Critically-acclaimed horror author Terry M. West continues his Magic Now series with this standalone novel that presents a world only a slight shade darker than our own.

The Kindle edition of this book features a special preview of the next Night Things book, UNDEAD & KICKING, which is coming soon.

This entry was posted in Books and tagged books, Night Things. Bookmark the permalink.