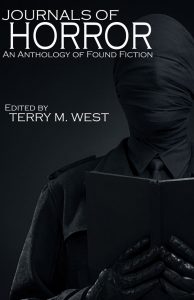 From Wikipedia.org: Found footage is a genre of film making, especially horror, in which all or a substantial part of a film is presented as discovered film or video recordings, often left behind by missing or dead protagonists.

Terry M. West and Pleasant Storm Entertainment, Inc. present a revolutionary approach to the horror fiction anthology. JOURNALS OF HORROR: Found Fiction is a collection of terror inspired by the mechanics of the found footage horror film. In JOURNALS OF HORROR, the stories presented are horrific encounters committed to paper, item or device and discovered later. Each tale is a case file that has been transcribed from some type of unearthed diary. These tales can be discovered anywhere.

This entry was posted in Books and tagged books, Journals of Horror: Found Fiction. Bookmark the permalink.