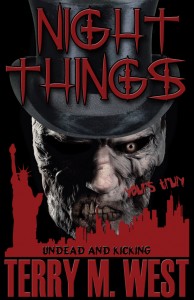 Carol Haddon is a former professional fighter living in New York City. Now a social worker, she has devoted her career and life to assisting the Night Things. She is killed after a senseless and brutal attack on her office. Carol is reanimated by the mad genius, Herbert West. West discovers that Carol carries a very unique DNA that could change things dramatically for the zombie population of the world. Johnny Stücke, the mysterious leader of the Night Things who has emerged in the media after Z Day, a citywide zombie attack a few months prior, takes Carol under his wing after her life as a mortal is stripped away. Carol’s creation has also attracted the attention of Herbert West’s greatest enemy, Edmund Wraight. An experiment of Herbert West’s gone horribly awry, Wraight is an ageless, violent, and hungry creature who was once known as the infamous Jack the Ripper. And he must stop West before the scientist unlocks the secret hidden in Carol’s blood.

This entry was posted in Blog, News and tagged Herbert West, Jack the Ripper, Night Things. Bookmark the permalink.