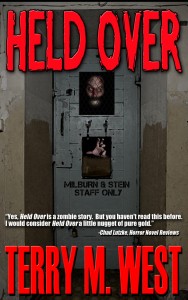 HELD OVER is a ferociously original zombie tale from horror author, Terry M. West. Welcome to the Milburn & Stein Home for Continuance. It is a first class living community for the recently undead. This story is just one of the dark tales featured in West’s critically-acclaimed collection, WHAT PRICE GORY. HELD OVER is part of the Single Shot Short Story series which adds exclusive story notes and bonus content that you can only find in the Single Shot Story Series. Here is what people have said about HELD OVER:

“HELD OVER is a prime example of [Terry’s] skill at reinterpreting an idea that, in my opinion, has been done to death (pun entirely intended haha), and finding a whole new life in it…”
-Heather Omen, DIGITAL MACABRE

“HELD OVER is the author’s unique take on zombie fiction that caught me by surprise…”-Dale Herring, GEEKDOM OF GORE