Fall of the Cheating King 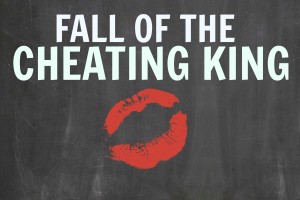 So, I had this friend. Let’s call him Poindexter, though he wasn’t an extremely intelligent man. He was a country boy from Azle, Texas.

By the time he was thirty, he had several ex-wives and a mess of kids. He had like eight or so children, I think. He had been amassing them since his late teens and I don’t think he could even remember all of their names. So as you may have already guessed, Poindexter loved women and he loved what you could do with them even more.

And this was the source of the only wisdom Poindexter had been blessed with. He absolutely excelled at cheating on his girlfriends.

His brain could come up with the most elaborate schemes. I often pictured him in a dark, smoky basement, poised at a chalkboard, feverishly scribbling equations and making discoveries denied to lesser brains.

He was to cheating what Babe Ruth is to baseball. He was its absolute master, and other men would travel far and wide to kiss his ring.

Of all of his tricks, he had one that was undeniably the greatest cheating trick ever. It was infallible. It was as complex as the universe itself and as simple as a child’s prayer. Now understand, by sharing this with you, I put myself at great peril. There are men out there who would not appreciate the light I am about to shine on this. But you deserve to know. The world deserves to know.

Poindexter’s greatest contribution to the bible of cheating was this: if you are going to cheat on your girl, cheat with someone who shared the same name as your girl.

If there was one grave error that cheaters invariably made, it was uttering the name of the other woman either in innocent conversations or during a passionate bout of sex.

At the time of this discovery, Poindexter was dating Laci, a truck stop waitress with curves that could make a semi overturn and a jealous streak that bordered on the psychotic.

“She’s a little crazy, but she’s good in bed,” Poindexter would explain, and men would understand, willing to risk a scar or two to satisfy their sweaty appetites.

It took him awhile, but Poindexter finally found Lacey, a little wallflower of a lady who was a minister’s daughter, making her prone to spiteful depravity. Poindexter played them both.

He never worried about getting caught, and he interchanged their names often, sometimes by accident but mostly with great impudence.

This worked out fine for him until one fateful night. He was with Laci, and they were engaging in Poindexter’s favorite activity; the one that had yielded him so many children. At that critical stage of the activity, he shouted Lacey’s name. Laci paused, and then scrambled away from Poindexter. She was angry.

“You said Lacey!” she screamed.

Poindexter was confused. “That’s your name,” he said.

“No,” Laci corrected him,as she looked for something sharp and painful. “You said Lacey E-Y! I am Laci with an I, you cheating bastard!”

He barely escaped with his life. When he had recovered, he went back to little wallflower Lacey, but he accidentally called upon Laci’s name during dinner. Luckily for Poindexter, Lacey wasn’t a violent girl, but she definitely didn’t appreciate the treachery, and she washed her hands of him, as well.

Sara quickly found out about Sarah.

Kelly uncovered the truth about Kelli.

And Carol and Karol had a knock down drag out over the situation.

Soon, there was no one out there Poindexter could fool with his trick.

It was as if the entire female population had taken a half step up the evolutionary ladder. Nature had suddenly equipped them with a natural defense system, and it was working well.

Poindexter was done in Azle. He eventually disappeared. Some say it was because of all the alimony and child support he owed.

But I am not so sure. You know how vengeful some women can be.

If Poindexter is still out there, though, he is no doubt staring at those calculations in a smoky basement somewhere.