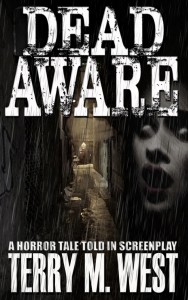 Buy the Kindle or paperback!

“It is a wonderful tale told in the form of a screenplay; a sultry and lurid screenplay. Oozing character and atmosphere, harking back to the heyday of 80’s horror. Gore, skin, sex, drugs and a broken hero you can root for, DEAD AWARE has it all…”-Zachary Walters, THE MOUTHS OF MADNESS PODCAST

Dead Aware is a new tale from critically-acclaimed horror author and filmmaker, Terry M. West. It is a harrowing tale written in screenplay format.

As a young man, Dunlavey had a hunger for forbidden knowledge. He sought out occult practices and dark, archaic rituals all over the world.

Dunlavey’s thirst for arcane wisdom sent him to New Orleans. He met and fell in love with Myra, a voodoo priestess. Myra preformed a sex magic ritual with Dunlavey. This ritual allowed him to open his mind’s eye, his third eye, and see the dimensional rifts that lie between our world and other places.

During the ceremony, Myra’s husband, Falcon, interceded. He killed Myra, but left Dunlavey alive and cursed with an opened third eye.

Fast forward to the present. Dunlavey lives in New York city. He is a private investigator that assists the NYPD with any case that is deemed occult or unusual in nature.

Having lived for so long with the curse, Dunlavey has become self-destructive. He is an alcoholic. He also abuses drugs and has relationships with the wrong women.

His curse forces him to constantly see negative energy and spiritual manifestations. It is akin to constantly being on a bad acid trip.

Dunlavey is able to protect his apartment and office using white candles and cleansing spells, but on the streets he is vulnerable to jarring psychic residue and creatures that lurk slightly beyond our veil that could be called forth with the turn of a phrase.

Dunlavey is called in to investigate a series of murders. Transients are being heinously killed and reassembled in a way that Dunlavey has never seen in his researches. As Dunlavey is drawn into the case, he soon realizes that the killer is aware of him, and able to strike out at him through his visions.

There is Roxy Carmichael, the S&M queen with a violent sexual appetite who has been sleeping with Dunlavey. There is also Sergio, the flamboyant owner of an occult bookstore who often advises Dunlavey. And then there is Gavin, the nerdy superintendent of Dunlavey’s building who has long hounded Dunlavey to collaborate on supernatural books.

As Dunlavey and those close to him are terrorized by a demon that can blindside the detective at any given moment, Dunlavey has to fight his own suicidal tendencies to put the killer down, and find a small glimmer of hope in his extremely dark world.

This entry was posted in Books and tagged books, Dead Aware. Bookmark the permalink.

2 Responses to Dead Aware: A Horror Tale Told in Screenplay