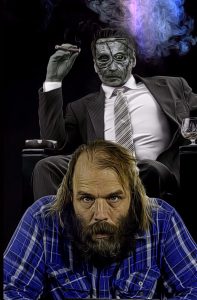 A book series that began in 2013, Night Things imagines a world where monsters exist side by side with humanity. New York City has become a macabre melting pot. Vampires, werewolves, zombies and ghouls are now the new immigrants and they are chasing the American dream. The Night Things have become part of the system. Iconic “classic monsters” portray crime lords, pornographers, cult leaders, and street hustlers. New York City is run by Frankenstein’s Monster (Johnny Stücke). The Night Things fear Stücke and this dread is the only thing that keeps the city from being devoured.

With a liberal dose of violence, gore, and sexual content, Night Things is closer in tone to Breaking Bad and The Sopranos than Penny Dreadful.

“I envisioned Night Things as a TV series after I finished the first book,” Terry says. “I’m thrilled that Joel and Council Tree Productions see its potential. I’m very excited and grateful that my pitch will land on the desks of decision makers at major networks/streaming services. It’s a great opportunity and we are all working hard on it.”

Says Eisenberg: “Night Things is a blast. Council Tree opened the door to independent authors and we’ve been fortunate to discover true talents like Terry M.West. As a fan of Universal monster classics, what Terry has done to reinvent and, in some cases rejuvenate, these legendary creatures is in a class by itself. We’re anxious to get this one going.”

Council Tree Productions is jointly-owned by Eisenberg and Hillard, the latter owner of Council Tree Investors, a private equity firm responsible for developing, or advising on, several billion dollars in telecom investments, including Telemundo.

Night Things will be pitched to executives in the last quarter of 2017.

This entry was posted in News and tagged news. Bookmark the permalink.