All of the Flesh Served: A Novella 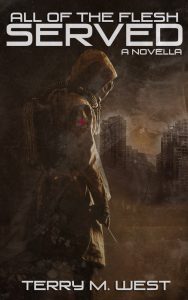 “A brilliant and disturbing dystopian fever dream. If this is in our future, pray you’re not alive to be a part of it.” –Hunter Shea, author of We Are Always Watching & The Jersey Devil

“All of the Flesh Served is a haunting soliloquy written by an experienced author with a stern voice.”-Horror Novel Reviews

Any record of the 45th that does not recognize him as a prophet is propaganda and a lie. False history. The truth is with the 45th. His word is absolute for it is God’s word…

Hundreds of years after the great cataclysm, the Ministry of the 45th survive in a network of scientific bunkers. The last bastion of the old holy order, the 45th are bent on rebuilding the scorched earth and eliminating God’s enemies. The Ministry wages a war against the mutant topsiders that occupy the dead states of the Soviet Union of America. Defending the 45th are the Red Guard, genetically engineered soldiers who are programmed to obey through their lifebrand. Dr. Morgan is a serviceman for Unit 468 of the Red Guard. His lifebrand being medicine, Dr. Morgan is the longest surviving field medic to serve. But Dr. Morgan is a deeply conflicted man with violent fantasies that contradict his pledge to preserve life. After escaping an abduction by the topsiders, Dr. Morgan’s faith is cracked. During a furlough in the high Chancellor’s bunker, Dr. Morgan is hailed a hero and taken off the front lines. But he soon realizes that someone has altered his lifebrand and lifted the veil that concealed the greatest deception ever perpetrated. Dr. Morgan has just become the most dangerous man in the wastelands. And when he discovers who the real enemy is, the revelation unleashes a fury strong enough to destroy what is left of the earth.

All of the Flesh Served is a disturbing vision of what could one day come.

Included as bonus material: the original short story that would become All of the Flesh Served: A Novella.